The indigenous people of New Zealand are known as the Maori.  The Maori are also Polynesian and it is believed they migrated from Polynesia in canoes around 9th century to 13th century AD.   Te Reo Māori is their native language which is also related to Tahitian and Hawaiian.  The Maori language and culture has a major impact on all facets of New Zealand life.  The Maori comprise approximately fourteen percent of the country's population and the Maori have a rich tradition in art which inspires many artists worldwide.

Traditional Maori Artists use materials such as wood, bone, jade or greenstone, shells, flax and feathers.  The colours black, red and white are commonly used in Maori Art.  Red symbolizes prestige, power and status and is often used in decoration of important items such as buildings, structures and canoes.


The Spiral in Maori Art

Art has always been an integral part of Maori culture. The spiral and koru designs are important elements in Maori art.  Spirals are a form used in surface decorations in relief carvings, tattoos and other pieces of artwork.   The koru scroll or spiral shape is derived from the New Zealand fern plant and "Koru" is the Maori word for the new unfurling fern frond.  This pattern is used in many Maori and New Zealand art forms and symbolizes new life, regeneration, growth, strength and peace.  The Maori believe the design is a symbol for renewal and hope for the future because everything is reborn or is part of a continuum in life. 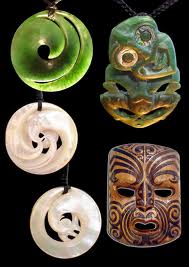 To find out more about Maori Culture and Art visit the Auckland Museum. 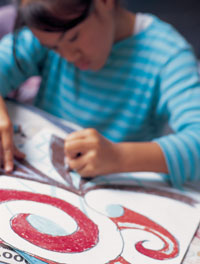 Watch this video from teachertube.com